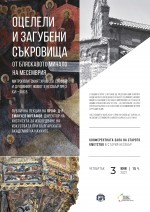 In his lecture, Prof. Emmanuel Moutafov will present new intriguing facts from his study on the murals, icons, relics and the significance of the New Metropolitan Cathedral of St Stephen and its sixteenth-century art environment: the Nesseburian churches of St George the Younger and of the Ascension and the Church of the Dormition on St Anastasia Isle in the Bay of Burgas. St Stephen blends together elements of the Cretan-Athonite and generally, the Epiran traditions in a verbose, learned and, to a large degree, pretentious ensemble that evokes no particular parallels in the seventeenth century. On the other hand, its iconographic programme has to some extent taken into account the then existing earlier medieval paint layers. It is a typical metropolitan church of a cosmopolitan coastal city that has set itself a challenge to enlighten and at the same time to satisfy the tastes of laymen and clergymen belonging to a big, educated and travelling parish. From this vantage point, the sixteenth-century decoration of St Stephen is a specific conclusion of the „Greek“ late medieval period and of Byzantine itself through the reminiscence of the Palaeologan models, of Constantinople, found in abundance here; yet, also shifting an ideological gaze to the pre-modern period, to the Modern Greek language, whose major doctrine since the seventeenth century has been the assimilation of the rest of the Christians within the empire through the dominance of Phanar, as well as through the word of the New Testament, i.e. the vernacular language of Modern Greece. Studying the murals at St Stephen and the other churches decorated by the same painters, the researcher drew on many written sources that help to unravel the social, economic and spiritual mysteries of Nessebur’s past of the Ottoman period, when the city owing to its well-educated citizens was much more than just a summer resort and a centre of commerce. Such are, for instance, the unique to the Orthodox world scene with the Theotokos at St Stephen; the illegally translated in 1925 Nessburian relics, which are now in Greece; information about an Oecumenical Patriarch who was born in Messambria; a new reading of the Kontakion of Messambria.
After the lecture, at about 4:30 pm, Prof. Emmanuel Moutafov will interpret for those interested the murals of St Stephen in situ. The event is held under the 2020 cooperation agreement concluded between the Institute of Art Studies, BAS and the Ancient Nessebur Museum.

The documentary Guardians of Our Conscience, writer Teodora Stoilova-Doncheva, Institute of Art Studies, winner in Zagreb

The Institute of Art Studies, BAS, joined the European Alliance of Academies