Decisive to the choice of the theme are the following arguments:
1) Lubomir Denev is undoubtedly one of the leading cultural figures of the active generation of universal Bulgarian musicians: a composer, conductor and jazz pianist, enjoying international recognition
2) Regardless of the wide range of his compositional opuses (symphonic, chamber, musical theatre, theatre and film music, choral and solo songs), his musical theatre works carry the most significant weight.
3) L. Denev’s musicals, on which my attention of a researcher is focused (Tomorrow at Ten (author’s libretto); Alice, based on Lewis Carroll’s book of the same name; Love’s Labour’s (Not) Lost, based on Shakespeare; The Law of the Jungle after Rudyard Kipling and Yesterday (libretto by Stephen Mavrodiev), are compositional and theatrical projects receiving the most prestigious national awards and performed abroad, as well as a solid proof of his long-standing performative and creative practice in commercial genres (an artistic background with lasting reflection). In their capacity of empirical material, however, these works, their successive stagings and productions have not been subject of thorough systematic study.
The study of the research object will rely on the generalised information of the series of volumes of Bulgaria’s Musical Theatre published by the Musical Theatre research team and the Encyclopaedia of Bulgarian Composers by El. Vulchinova-Chendova, of Ivanka Vlaeva’s book The Creative Choices of Lubomir Denev and Improvisation, of the studies on popular music in Bulgaria (by Gencho Gaitandjiev, Rosemary Statelova, Claire Levy, Yordan Rupchev), as well as of a number of critical reviews by various authors in periodicals as well as of my own publications in editions of the Institute of Art Studies and of the Musicologists Section, Union of Bulgarian Composers (Art Readings. Bulgaria’s Historical Musicology), as well as of the specialised press (journals Bulgarska Musika, Musikalni Horisonti, EK; weeklies Musica Viva and Kultura). I have been following Lubomir Debev’s career for years now and have at my disposal recorded talks, which would be inserted in my reasoning on the subject.
What is more important in this case, of course, is the opportunity for taking multidirectional analytical approaches and problematizations oriented towards the creative experiments with various genre stylistics and combining compositional principles of classical music with the twentieth-century jazz, pop and rock music; the opportunity to delve deeper into the team work of the composer with the directors, choreographers and production designers of the stagings and in the typical of the musician understanding of theatrical and performative, of storylines and characters, as well as of the correlation between the pre-receptive strategies and the real success of each of the musicals.
The assumptions I would try and defend in the study boil down to the following:

1) Comparableness of L. Denev’s authorial projects in the genre of musical to relevant examples of the period under consideration;
2) Deducing an identification complex of Lubomir Denev’s creative ideas in regard to dramaturgy of musical theatre using my published study Lubomir Denev’s Cain: A New Concept of Chamber Opera.
3) Outlining the creative horizons of the popular genres of musical theatre in this country from the end-1980s until now, proving the leading, in my opinion, role played by the composer in this field. 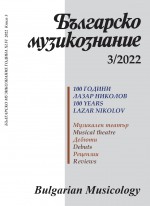