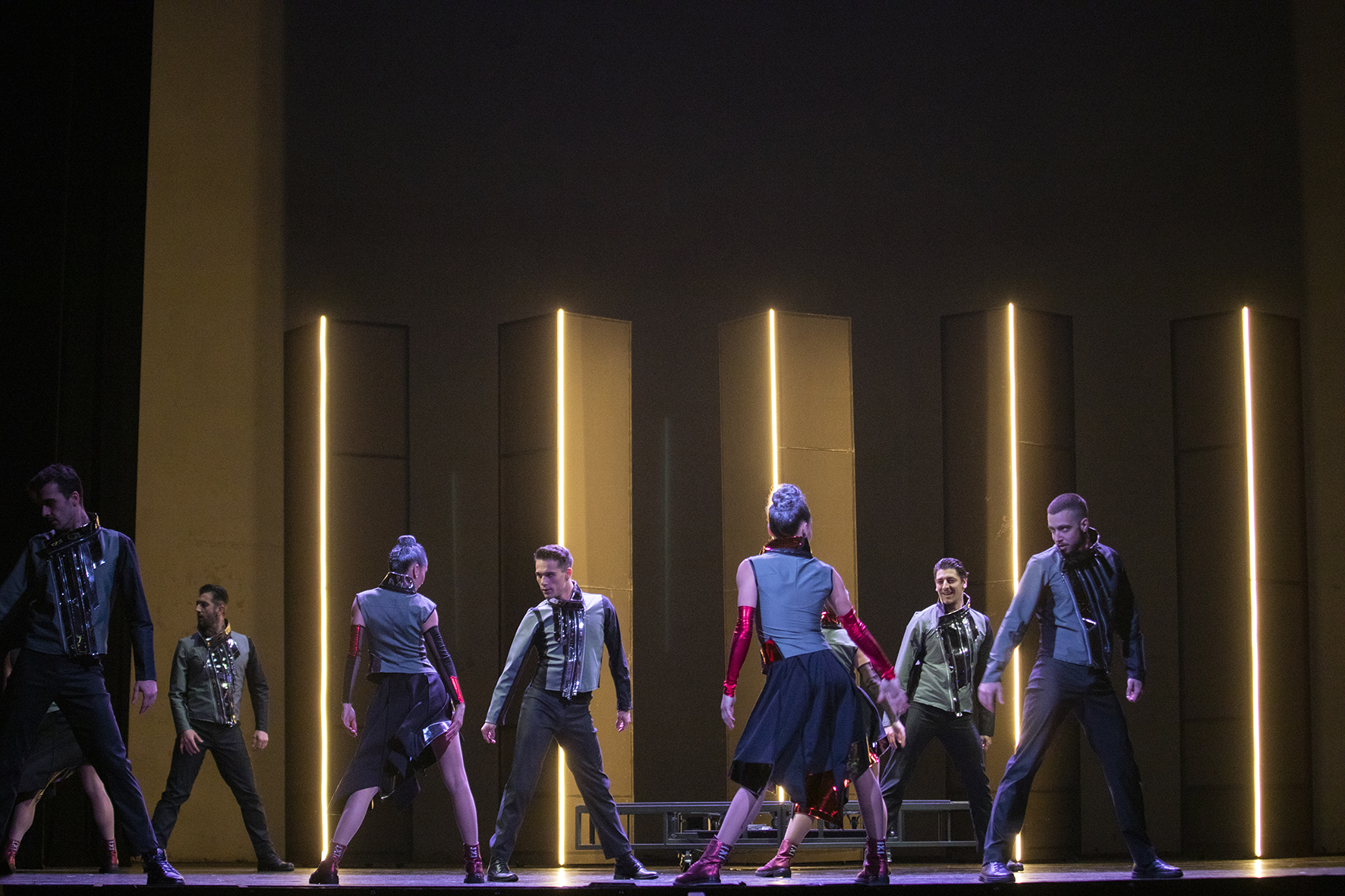 The myth about Pygmalion, the sculptor, has excited humankind for centuries – Pygmalion creates the most beautiful sculpture of a woman, Galatea, and when he falls in love with his creation, he begs the goddess of love Aphrodite to bring her to life. The idea about the unanimous matter, received life due to the benevolence of gods, bring to the front the ‘creator – creation’ interaction and the question to what extent the author is the actual creator of his creation. Or perhaps, is it vice versa? This connection has always been multilayered and every time it receives a new reading both in literature and on stage. In this line are also the performances of the Russian choreographer Boris Eifman – The Pygmalion Effect and Rodin, but also a few more choreographic decisions.

In the latest premiere of the Arabesk ballet, The Galatea Effect, the ‘creator – creation’ interaction is again on focus. The performance was ready last year, but came on stage just now due to the many limitations and closings after Covid-19 pandemic.

According to the published text in the progamme, the ballet reading of Boryana Sechanova (a choreographer and director of the Arabesk ballet) is influenced by The Galatea Effect play by Ephemia Fard and Pygmalion by Jean-Jacque Rousseau.

Boryana Sechanova moves the action into Space where robotized men and women live, while the sculptor, named as the Creator, tries to turn the robotized creatures into a being with harmonic presence, in whose heart to inject (and awake) tenderness, sympathy, and love. A prototype of his future sculpture is namely the third person in the ballet called the Woman. Actually, only the Creator and the Woman are alien to this planet and its robotized inhabitants and marionettes. This is demonstrated through the choreography – their movements are larger and plastic in comparison to the repetitive and one-sided movements of the girl robots.

In the end, the Creator does manage to model and implement emotions and expressiveness into one of the robots. But this robotized copy of a woman remains ‘a humanized’ machine without reaching the dreamt tenderness, beauty and harmony typical of a Woman. Actually, the question without an answer is if the Woman really exists or it is a product of the Creator’s dreams. The finale of the play is emblematic – a trio between the Creator, the Woman (the undreamed dream) and the Sculpture (materialized, but not a complete reflection of this dream). The trio, whose movements were repeated many times and created the impression not only of a certain robotization, but also time travel with one and the same known ending.

Actually, the end remains open – may be the Creator will continue to travel from world to world and make continuous attempts to create the perfect creation, but it will never be as perfect as the idea (dream) about it. This ‘cosmic’ interpretation of the Galatea myth refers to the endless roaming in the Galaxy and the tireless chasing of the dream for perfection. the Creator might have visited the Earth and all we are a result of his creativity. A similar ending offers Boryana Sechanova’s idea at a higher level, but whether it was truly the idea of Sechanova, I can’t be certain.

According to the performance description in the programme ‘The Galatea effect spectacle explores the process of creativity, the creation as a complex combination of the Creator’s personality, the subject he recreates and the idea he aims at’, I would only add that creations would be a little more perfect than the visions about them by the Creator.

The choreography is developed in three main plans. The staccato, repetitive movements of the robotized dolls make a stark contrast with the significantly more plastic movements of the Creator and the Woman (especially in their first duet). The community of connoisseur, who visit the museum and comment on the exhibited sculpture is presented via grotesque movements and deliberate static poses – this raises one of the present themes of the performance, namely how a creation is evaluated by society and to what extent it is capable of understanding the mission of creation. This theme is barely mentioned in this performance, but it is a recurrent theme in the works of Boryana Sechanova, for instance, in her interpretation of ‘The birds’ by Aristophanes.

The choreography of The Galatea effect is as if deprived of emotions, due to which the spectators also remain a bit cold. Even in the duet between the Woman and the Creator, which should be at the start of the dream to model a sculpture, lacks such emotional peaks and passion. They are also not present in the next duet between the Creator and the created Sculpture. Boryana Sechanova is a very experienced choreographer and perhaps such an approach aims at consciously removed focus off the problematic in order not to intrude her own reading upon the audience. But to me, this lack of emotions was burdensome. All in all, the deliberate removal of emotions and the static representation of actions on stage are the traits of a modern trend in performance, which, in my view, deprives it from its strongest means to affect the audience i.e., empathy.

The performance impresses also with the effective and lean scenography of Venelim Shurelov – five columns, behind which the actors appear in the spinning round center of the stage, reminding of a potter’s wheel, and a podium on which the ready-made art-products are exhibited. It is also important to mention the professional artistic lighting of Georgi Buyukiev. The columns are also used as multimedia screens, which project fragments of the action on the stage, or present the exhibited sculpture from different angles.

The costumes by Adriana Naydenova outline the three main groups of effectively lit by the spotlights silver leotards and tunics from nylon for the robotized cosmic beings, casual trousers and a T-shirt (for the Creator) and intriguingly decorated dress (for the Woman) and sparkling accessories for the society, reminding of a replacement of content with outer shine.

The music of Petar Dundakov sounds like it comes from the Cosmos and is very emotional in the last duet between the Creator and the Sculpture.

For the first time from along ago, the Arabesk ballet has a spectacle, which is complex, contemporary and memorable in all its components – music, conception, choreography, scenography, costumes and lighting.

We hope that this performance will have a long stage life, because the Arabesk ballet completely deserves it.